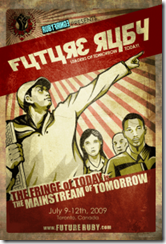 Pete Forde and the gang at Unspace are hosting another kick ass conference about Ruby. FutureRuby is the evolution of RubyFringe. (I’m not sure why the decision to use a Maoist propaganda theme for the art direction, but it looks great. Perhaps it’s a way to fight the Imperialist regimes of Java and .NET).

RubyFringe is an amalgamation of a series of events focused on Ruby and emerging platforms including the browser, the mobile phone and other devices.

Dan Grigsby who runs MobileOrchard is hosting an "Beginning iPhone Development Workshop” as part of the FutureRuby activities. It is great to see developers like Dan understand the power of mobile devices, and the ability to use their repertoire of developer tools to build for an emerging important platform. Being able to build custom web applications for iPhone, native iPhone applications in Objective-C (haven’t written Objective-C since I worked on a NeXT box in 1994 at UWaterloo). Joey deVilla talks about why mobile is the platform for the next billion users and why netbooks are a red herring for computer manufacturers. Why I might consider the MobileOrchard workshop:

Pretty compelling 2 day class.  There are a lot of things I like about FutureRuby, FAILCamp and the MobileOrchard workshop.

We’re building a platform for cross platform gaming — technology that enables games to be played between mobile and the web.  Think playing games from your iPhone to Facebook to BlackBerry to MySpace.  Our founders are ex-Amazon and ex-Microsoft rockstar developers and both are ex-Waterloo. Our first iPhone game, Shake and Spell is already live on Apple’s AppStore (it’s a top 100 application).  We are all about work and play hard and believe employees are our biggest asset.  We are funded by a tier 1 VC and located in a King West loft space with 22 ft ceilings and a badminton court inside.  Drinks every Friday.

Ready to kick some tail and have an amazing time doing it? How about working with the most cutting edge technologies, applying them to the next generation of gaming? We are looking for the brightest and most talented software engineer who will work with the platform team on building out our gaming platform in the cloud.  He/she will design and implement highly-scalable server systems to connect to the world’s most popular networks.  He/she will also be involved in building our client frameworks for iPhone, BlackBerry, Facebook, and Android.  Sound like fun?

The nitty gritty; we’re looking for people with:

If you don’t have all of the above, no sweat.  Let’s talk.

Jay Goldman and I picked up iPhones while at Mix08 and SxSWi. I think we have different experiences with the phones, but generally both are very positive and the key differentiator between a great experience and a good experience appears to be your dependency on Exchange support. Basically Jay runs iCal, Mail.app to connect to IMAP accounts and Google Calenders. I work at Microsoft and I rely on Exchange Server 2007 on my PCs, my Macs with Office 2008 and Entourage and on my Palm 750 on Rogers.

The question continues to come up as to why we haven’t seen the iPhone picked up by one of the Canadian carriers. The conversation can focus on the third world have cheaper data than Canada. It can be about the pricing of contracts or devices in Canada. It comes down to some very simple business considerations:

So the market is saturated, or at least very close to being saturated in urban centres. Let’s make some assumptions that all of the high value long time customers already have data plans and long-term contracts. These users switch phones on a regular basis because they derive status from the latest, greatest device. They probably don’t need or want to switch carriers. Coupled with the ARPU is the highest in North America. Data and non-voice services are currently less than 10% of the ARPU number and expected to grow. What advantage would Rogers have for negotiating a deal with Apple?

Unlike AT&T with aggressive rates to entice and retain existing customer, Rogers and other Canadian carriers are entrenched. Churn rates are around 2% and I wonder what churn looks like in higher value, higher spend customers. Canadian carriers have the highest ARPU around. Apple has been insistent on changing the wireless model by removing hardware subsidies and driving rates down on necessary data services. What part makes you think that Rogers, Telus or Bell is going to give up $10-18/month of ARPU and drive the overall service costs down?

Particularly when people like me and Jay Goldman are just buying iPhones in the US and running ZiPhone and upping our plans to handle more data. Well we might see an iPhone in Canada, but it won’t be for a while, after the carriers have milked additional ARPU out of the current set of non-voice services.

It makes me wonder where the CRTC is in all of this?