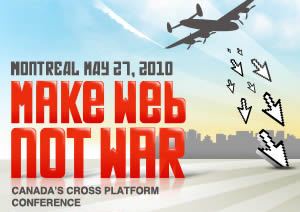 I’m going to miss this years’ Make Web, Not War event in Montreal on May 27, 2010. I’ll be attending another event in Ottawa. There is a great list of presenters including:

It’s a great training event for developers in Montreal. Thought I might be biased, I keynoted the 2009 event in Toronto. It is great to see continuted support of interoperability and developer choice. Joey and I joined Microsoft after doing most of our recent web development on other platforms (Rails, PHP, ColdFusion and Java2). I still have a deep interest in understanding the impact of emerging technologies (lately I’ve been looking at noSQL and scaling solutions).

If you’re going to be in the Montreal area. Or better yet, if you want to make your way from Toronto to Montreal. Join Joey and the gang on the DEVTrain. For $50 you get a subsidized train to Montreal starting on Tuesday May 25 at 9:00am and leaving on Friday, May 28 at 11:25am. Nothing like power, wifi, food, a beverage, and NERDS ON A TRAIN. I think Joey will be playing the role of Samuel L. Jackson on this train ride.