Today is my 1 year anniversary at Microsoft Canada. I’m guessing there are a lot of unhappy gamblers in the pool. It’s been a fun year. May and June are always full of surprises and changes, fortunately this year the changes were much less scary and exciting. Less scary.  Anybody remember DemoCampToronto6? Unfortunately I don’t, it has been 2 years since the infamous BarCampER where I had the misfortune of having a heart attack. So I look forward to making it through May without any surprises.

And it’s been 1 year since I joined Microsoft. Can you believe it? Hopefully you didn’t loose too much money on the pool.

The Year in Review 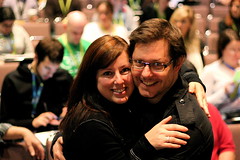 I attended a lot of conferences and events this past year. It felt like I was on the road a lot.I had a great time meeting people, hearing about what you were building and your mixed reactions to Microsoft. Some very positive. Others much more negative. I shouldn’t be surprised at the distribution of reactions and responses, but I think I was most surprised by the positive. I hadn’t really expected to become the public face of Microsoft Canada at many of the events. And I’m pretty sure that providing real-time bourbon-fueled support wasn’t in my employment contract, but apparently if you buy me bourbon I’ll provide substandard support. I haven’t spent a lot of time in the Microsoft ecosystem but I’ve been introduced to great people like John Bristowe, Mack Male, Derek Hatchard, Colin Bowern, Mark Arteaga and others across Canada. I continued to meet folks in the *Camp sphere including Vincent & Phillipe, Patrick Lor, Cam Linke and others. And best of all, I keep getting to see my friends and acquaintances around the country (you know who you are).

Places to Go, People to See

Jon Udell asked that we hold off evaluating his joining Microsoft:

Wait until the evidence is in, then decide for yourself. I’ve been in this game for a long time. I think my record of pragmatism and agnosticism speaks for itself…

Well it’s now been a year. And I want to know what you think? Good? Bad? Otherwise?

What can I do to make the next year awesome for you? the community?