BARCAMP TORONTO
BarCamp was created in response to Tim O’Reilly’s ultra-exclusive FooCamp, and Toronto was quick to jump on the bandwagon. Billed as ‘un-conferences,’ these community-driven events for local tech geeks require participation from all attendees. BarCamp has several spinoffs, including the monthly DemoCamp where six presenters have 15 minutes to wow the crowd with their latest innovations. 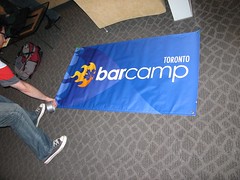 And CityTV’s newest report was named Best geek personality. I wouldn’t necessarily call Amber a geek, but she is (and has) a great personality.

AMBER MacARTHUR
Her recent appointment as new media reporter at Citytv, extensive work with G4TechTV and Leo Laporte (podcaster of the year), as well as a lengthy tech reporting background, make Amber the unassuming and friendly face of tech news in Toronto and on the web. It’s hard to find a Toronto tech event where MacArthur isn’t busy taking notes or filming interviews.