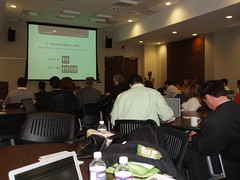 We're doing it at the MaRS Discovery Centre again, on University Ave near Queen's Park, and the dates are Tuesday, May 30 and Wednesday, May 31 (we'll let you know as soon as the ticket window is open so you can book your tickets).

We're hoping to pull together just as fantastic a group of speakers for keynote conversations and panel discussions, as well as blogging, podcasting and other workshops, and we'll also be having the same kind of social in the atrium and after-party bash that were so well received last time.

Probably an announcement from the team at tonight’s DemoCamp.