John Lam who attended and sponsored the first BarCampToronto keeps popping up in my reading. John is the author of RubyCLR which allows developers to use Ruby inside the Common Language Runtime environment on .Net. You can see John’s VSLive talk on the future of programming languages (John gave us a recap at BarCampEarthToronto last month). 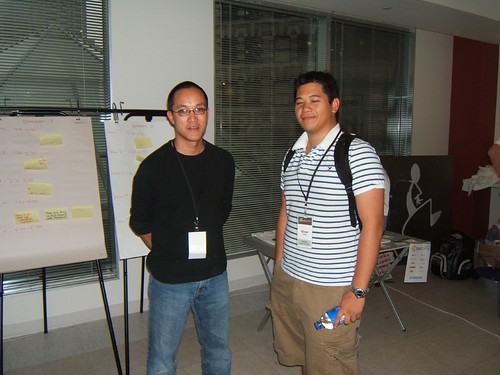 “And simpler code tends to attract developers. “I think that dynamic languages are really the next big thing,” said John Lam, a principal consultant and partner at Toronto-based ObjectSharp Consulting.” – eWeek Aug 28, 2006 – The Race is on to Woo Next-Gen Developers

“John Lam, a principal consultant and partner at ObjectSharp Consulting, in Toronto, and also creator of RubyCLR, a .Net to Ruby interoperability bridge, said the baked-in support for dynamic languages in Net 2.0 has helped him in his work.” – eWeek Aug 9, 2006 – Microsoft Phasing in Support for Dynamic Languages on .Net

Keep up the good work John. Hope to see you at DemoCamp9.